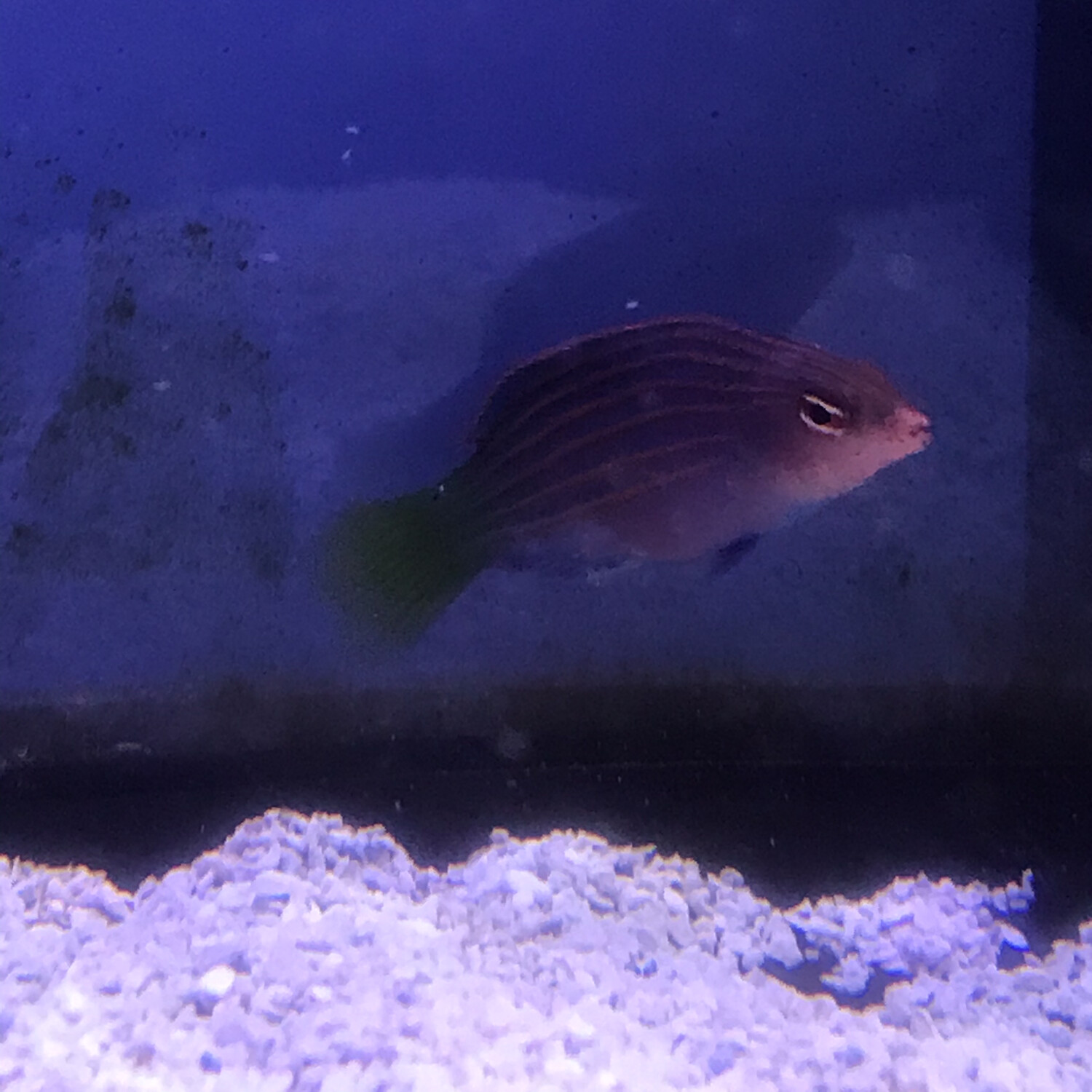 Habitat: Natural geographic location:   The Six Line Wrasse is found in tropical marine waters of the Indo-West and Central Pacific including the Red Sea; areas from northwestern Australia, the northern part of the Great Barrier Reef, and the northern part of New South Wales. They inhabit an area from clear coastal to outer reefs at depths of about 65 feet (20 meters), dwelling among protective coral branches.

Status:   These fish are not listed on the IUCN Red List.

Description:   Besides the striking contrast between the bluish to bluish/purple body and the six bright orange stripes of the Six Line Wrasse, one thing that sticks out are the 2 lines that go through the its intense red eyes! The cheek area is a light orange cast with several little specks dotting the area from the gill forward and under the eye area to the mouth. In front of the yellowish to yellow-green back fin they sport a blue-edged black ocellus, a "false eye" to confuse predators and give this little fish a chance to escape. The other fins are lighter in color from a clear to yellow transparent cast.

Length/Diameter of fish:   Six Line Wrasse adults reach up to 3.9 inches (10 cm), and have been reported to live up to 10 years in the home aquarium.

Maintenance difficulty:   Though sensitive during acclimation, these fish are hardy and easy to maintain once they are established in the aquarium. Make sure the individual you choose is eating and active.

Foods:   The Six Line Wrasses are carnivorous, in the wild they feed on many small organisms such as various crustaceans, molluscs, crab larvae, and they especially love fish eggs! Provide a diet rich in all kinds of protein foods, formulas and flakes with an emphasis on small crustaceans. They are very active and need to be fed twice a day at least if not more. As with other lined wrasses they benefit from productive live rock, picking on the rock eating the micro fauna it provides. They have also been observed cleaning the fins and bodies of other fishes, picking off parasitic isopods and copepods.

Maintenance:   These fish are generally very easy to care for and are hardy. Provide basic marine aquarium care with a 20% water change monthly or 10% twice a month.
For more information see, Marine Aquarium Basics: Maintenance

Aquarium Parameters:
This timid fish needs to have plenty of good quality live rock with holes for hiding to feel comfortable especially in a smaller aquarium.
Minimum Tank Length/Size:
A minimum 30 gallon (113.5 liters) aquarium.
Light: Recommended light levels
Prefers sunlight to moderate light.
Temperature:
No special requirements. Normal temperatures for marine fish is between 74° and 79° Fahrenheit.
Water Movement: Weak, Moderate, Strong
No special requirements.
Water Region: Top, Middle, Bottom
They will usually spending most of their time in the rockwork.

Social Behaviors:   The Six Line Wrasse should be kept singly as they do not co-habitat well with other lined wrasses.   They are basically reef safe with more semi-aggressive fish such as tangs, angels, and butterflies. They will not harm corals or coral anemones. They can also be kept in a non-reef setting with goatfish, puffers, and squirrelfish.
Avoid invertebrates such as small shrimp, or fish that are smaller than they are as they will become a quick meal. It may be feasible to keep the lined wrasses with larger crustacea however, as they reportedly are more amiable towards larger cleaner, marble and coral shrimp. But one day they may decide that a larger $20.00 ornamental shrimp looks pretty tasty and will make a mess of it until the shrimp is in bite size pieces. After that, do not put in any more shrimp! They have been known to go after small snails as well.
Avoid shy fish such as firefish, gobies, grammas, fairy wrasses, flasher wrasses, leopard wrasses, and others. The mandarins may or may not be picked on, but most likely will be. They will also out compete the mandarins and other fish for food. Slow-moving feeders such as pipefish and seahorses will starve in their presence. Predators such as groupers, lionfish, and scorpion fish will eat the lined wrasses in a heartbeat.

Sex: Sexual differences:   It seems there is a direct correlation between size and sex for the Six Line Wrasse. The males are generally the largest, with females coming in second and immature fish being the smallest.
The males will show off a more intense coloring during mating.

Breeding/Reproduction:   Has not been bred in captivity.

Availability:   The Six Line Wrasse is readily available. It can usually it can be acquired from a pet store or found on the internet and can cost up to about $20.00 USD.

Save this product for later
Display prices in: CAD

Very clean and professional store/owner.High quality corals and fish. The online shop is very well organized and up to date, makes it very easy to shop.Great supplies selection, beats ordering from amazon!Prices are great too!

Best place in winnipeg to buy your corals by far! Tanks are clean and brightSuper friendly and very helpful when picking out fish and corals. He taught our daughter how to pick up our emerald crab named Blondie named after the store 😃 and when we got home she picked him up put him in his new home gently.He even gave her a snack and colouring book for our 2 hour ride home .100% recommend and we will be back !

Such an amazing experience! Love the atmosphere and the customer service is over the top. George is always able to help out with suggestions and advice and truly cares about the customer.

We ship drystock and corals across Canada. Using Canada Post and FedEx overnight.